“If we had the wherewithal, if we had loads of money, we would embark upon a stimulus package akin to what the Americans have tended to do from time to time, just pour money into the economy, like what Obama did, put $800 billion into the economy…and that led to enormous growth.  When we did our economic recovery and stimulus project, we did not have the resources, we would have had to go and borrow heavily, which would have brought our deficit to a higher level.”

With this revealing statement, President Ramaphosa exposed the flawed understanding informing our monetary & fiscal policy decisions which have led to SA’s extreme unemployment, near 0% growth and junk status: 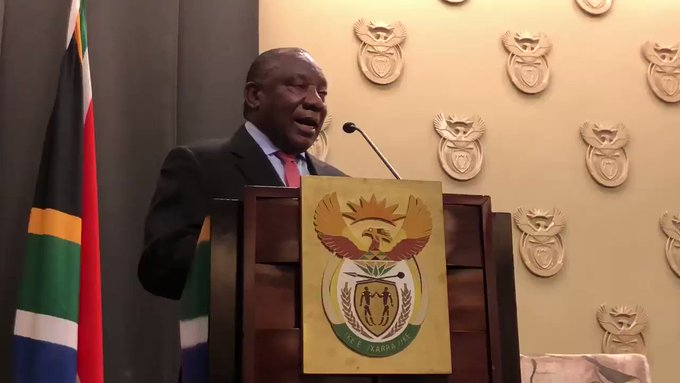 When the US, EU, UK, Japan etc implemented the stimulus packages that President Ramaphosa mentioned, they did not borrow from other nations nor from their private sectors.  Their central banks simply bought government bonds and paid for them by crediting commercial bank reserve accounts, creating hundreds of billions of Dollars, Euros, Yen and Pounds in the process.  This process was called Quantitative Easing (QE).

Here is a video of ex US Fed Chairman Ben Bernanke explaining how central banks create money simply by “using a computer to mark up accounts”.

Because central bank bidding on bonds and equities drives up their prices and drives their yields down, QE drove down the interest rates that those governments pay on their debt to near 0%.

In turn, inflation dropped because when government borrows from the private sector and pays back the principle plus interest, there is a net increase in money supply, while repayments to central banks reduces money supply.  Because QE led to less interest paid back to the private sector and more to the central bank, the result is less aggregate demand than what would have occurred had QE not been implemented.

The initial boost of money that QE injects into commercial bank reserve accounts immediately reduces the interest rates banks charge on loans they issue, because banks compete to lend out the added reserves (a higher supply of money to banks leads to lower price of money).

As a result of this, a borrower in the US, UK, EU or Japan can access capital at near 0% interest.

This cheap capital is what the SARB and SA Treasury is trying to attract to SA by keeping interest rates and government bond yields high.

Instead of providing our private sector and government finance at low cost as these foreign central banks have done, the SARB is adding to our household, business and government costs by keeping our interest rates high. And the cost of our high interest rates is massive:  SAs total debt (private sector and public sector) is over R6 trillion, so each % of added interest charged on our debt costs us R60 billion per year.  With most private borrowers paying over 10% and our public sector paying just below 10%, servicing our debt costs SA at least R600 billion per year.

SAs debt to GDP levels are relatively mild compared to other leading economies.  Our problem is that our interest payments are too high.  The SARB could easily reduce our costs by bidding down government and SOE bond yields and reducing the Repo rate but it refuses to do so.

Instead, rather bizarrely, the SARB says it is maintaining high interest rates in the name of reducing inflation, when our inflation has for years been cost pushed, not demand pulled (demand is in fact too low).  High interest payments and higher taxes (to fund governments higher debt costs) drive up our private sector costs, adding to our cost push inflation while reducing further the meagre demand for our products and services.  High costs and low demand discourage investment.

Worse still is the excuse that high interest rates are needed to keep the Rand strong by attracting hot money flows (carry trade etc) into SA.  Our current account deficit is now almost entirely due to foreign investors removing profit dividends and interest (primary income in graphs below).

In other words, we are importing cheap capital at high cost in order to temporarily boost the value of the Rand, even though the high interest we pay for that capital is what is driving the Rand weaker over the long term.  So we are paying high rates to attract the capital that is being extracted due to those high rates.  Like crack addicts, we chase that short term gain and pay dearly for it long term (over R600bn per year).

This importing of foreign capital to artificially boost the Rand value amounts to subsidisation of the foreign sector by making their products cheaper for SAns to import, and penalises the SAn productive sectors by making SAn products and services more expensive for foreigners to buy, incentivising more imports and less exports, and in turn a weaker Rand.  Then when the Rand weakens due to all of the above, we pay high interest to artificially boost it again.

Interestingly, none of the “structural changes” being touted as solutions to SA’s financial woes involve reducing the hundreds of billions we pay our financiers for our debt.  Instead we are told that our problem is that our government workers are paid to much, or that our labour laws must be relaxed so that foreign investors can extract even higher returns, leading to higher current account deficit, a weaker Rand and, if the madness continues, higher interest rates in response.

Mr President, whoever told you that we don’t have the money to fund teachers to educate our children, or to employ our youth to police our communities so that women and children are safe, or to fund corona virus test kits etc etc are lying to you.  Like the US, Japan, EU, UK etc we have our own central bank and sovereign currency.  As long as demand pull inflation remains low, the SARB can fund what we need simply by crediting bank accounts.  We simply can’t afford not to educate our kids, or keep our loved ones safe, or any of the other things we desperately need.  The costs of not investing in what is essential is always far more than what it would cost to invest in them, and as the source of all Rands in supply, the SARB must fund local investment cheaply.

The article was first published on https://buddywells.wordpress.com/

20 Useful Points to Remember About the COVID-19 Regulations