The European Court of Human Rights struck a major blow to Israel’s efforts to silence its critics on Thursday when it overturned the criminal convictions against 11 Palestinian rights activists in France.

The court ruled unanimously that the convictions against the activists for calling on shoppers to boycott Israeli goods violated the European Convention on Human Rights’ guarantee of freedom of expression.

The court has ordered the French government to pay each of the activists about $8,000 in damages and awarded them their legal costs.

BREAKING NEWS: European Court of Human Rights rules against French government & for the right of citizens to call for a boycott of Israeli goods on the basis of Israel’s apartheid regime.

This victory has major implications all across Europe! #BDSIsraelhttps://bdsmovement.net/news/european-court-human-rights-deals-major-blow-israel%E2%80%99s-war-palestine-solidarity …

The ruling is a significant boost to the boycott, divestment and sanctions movement that aims to pressure Israel to end its crimes against Palestinians and its violations of international law.

“This momentous court ruling is a decisive victory for freedom of expression, for human rights defenders and for the BDS movement for Palestinian freedom, justice and equality,” Rita Ahmad said on behalf of the Palestinian Boycott, Divestment and Sanctions National Committee (BNC).

The judgment will have major implications for state repression of the BDS movement across Europe, especially in Germany where “advocates for Palestinian rights face fierce restrictions on their civil rights,” the BNC added.

Israel and its lobby have in recent years encouraged governments around the world to pass laws and policies aimed at silencing supporters of Palestinian rights.

“Today’s landmark decision sets a significant precedent that should stop the misuse of anti-discrimination laws to target activists campaigning against human rights violations perpetrated by Israel against Palestinians,” Marco Perolini, a researcher for the human rights group in France, said.

The ruling comes at a time when Israel is charging ahead with plans to annex large parts of the occupied West Bank, no doubt encouraged by the failure of the European Union and its member states to take any meaningful action to stop it.

The case was brought to the European Court of Human Rights by the activists who are members of Collectif Palestine 68, a local group that supports the Palestinian-led boycott, divestment and sanctions campaign.

On 26 September 2009 and 22 May 2010, the activists took part in actions at a Carrefour supermarket in Illzach, a town in northeastern France.

They wore T-shirts saying “Palestine will live” and “Boycott Israel.” They shouted slogans and passed out leaflets urging shoppers not to buy Israeli goods, in order to pressure Israel to stop violating Palestinian rights.

They asked shoppers to sign a petition urging the supermarket chain to stop stocking Israeli goods. They were entirely peaceful actions.

Following the May 2010 action, a public prosecutor charged the activists with inciting discrimination, hatred and violence against a group of people because of its origin, race, ethnicity or religion.

As evidence, the charge sheet specifically cited their campaign slogans, including that “buying Israeli products legitimizes crimes in Gaza.”

The supermarket chain itself filed no legal complaint against the activists.

It was entirely a state prosecution, following the instruction of France’s justice minister who in 2010 told local prosecutors to go after BDS activists.

In December 2011, the criminal court in the city of Mulhouse acquitted the activists.

The trial court rejected charges that the activists intended to incite hatred or discrimination by calling on consumers not to buy Israeli goods.

But in November 2013, an appeals court convicted the activists. It sentenced them to pay fines and costs totaling tens of thousands of dollars.

In October 2015, the Court of Cassation, France’s highest tribunal for criminal appeals, upheld the convictions in a ruling that was widely viewed as a severe setback for freedom of speech.

In its ruling Thursday, the European Court of Human Rights affirmed that “the actions and remarks imputed to the applicants had concerned a subject of public interest” and “those actions and words had fallen within the ambit of political or militant expression.”

It added that “it was in the nature of political speech to be controversial and often virulent.”

The ruling faults the French courts for failing to respect Article 10 of the European Convention on Human Rights – the guarantee of freedom of expression – and failing to conduct “an appropriate assessment of the facts.” 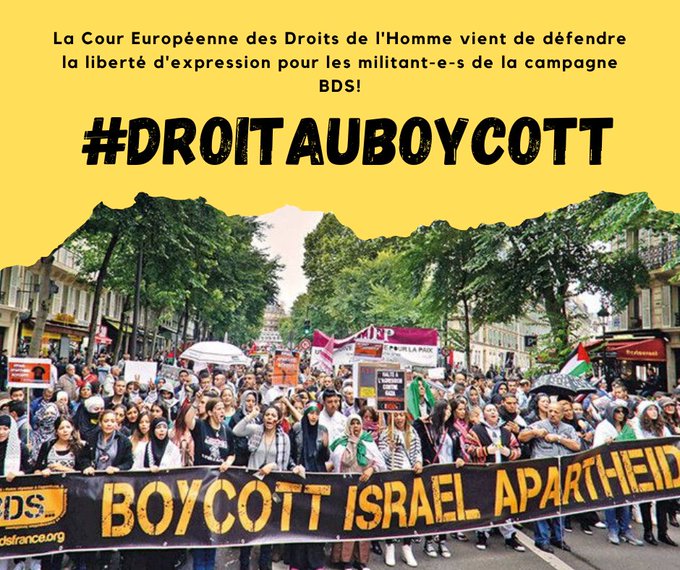 The campaign group BDS France celebrated the court victory and vowed Thursday to “continue boycott actions of Israeli products and multinational companies that are complicit in Israeli apartheid.”
“We also call for the boycott of complicit Israeli universities and institutions, as well as of cultural and sporting events that promote Israeli apartheid,” the group added.

“Israel, an apartheid country, cannot forever prevent the truimph of justice and freedom for the Palestinian people.”

Which Part Of SA's Negotiated Settlement Was Fair?